How to turn 6-foot boards into a 7-foot table

We had finished the carpentry for the kitchen, and the only thing missing was the table.  The clients and architect had long planned a large, counter-height table to complete the kitchen, but a suitable table was not presenting itself.  The unusual dimensions almost certainly precluded finding a pre-built table, and no custom design had gelled yet.  The call from Paris (Texas) broke the logjam.  It turned out that our client’s grandfather, a woodworker, was close to retirement, and he was clearing out his shop.  He had a pile of walnut that he’d had cut almost 50 years before and never gotten around to using.  Would his grandson be interested in it?  He was, and worked to convince me that I should be too.  Several times in the past I’ve gotten very excited upon learning of stashes of old hardwood lumber, but the troves always turned out to be firewood or compost, rather than glorious wide boards.  With some trepidation, I agreed to have the walnut shipped to our shop from Texas.

The walnut we received was neither treasure nor junk.  Some of the wood had gorgeous color and grain patterns, but it was soon apparent that the project would not be straightforward.  The first issue was that the clients wanted a 7-foot-long table, but we had received a pile of 6-foot boards.   Carol Marsh, the architect from Helios Design Group, came up with an elegant design for the top that solved the length problem for that part of the table. 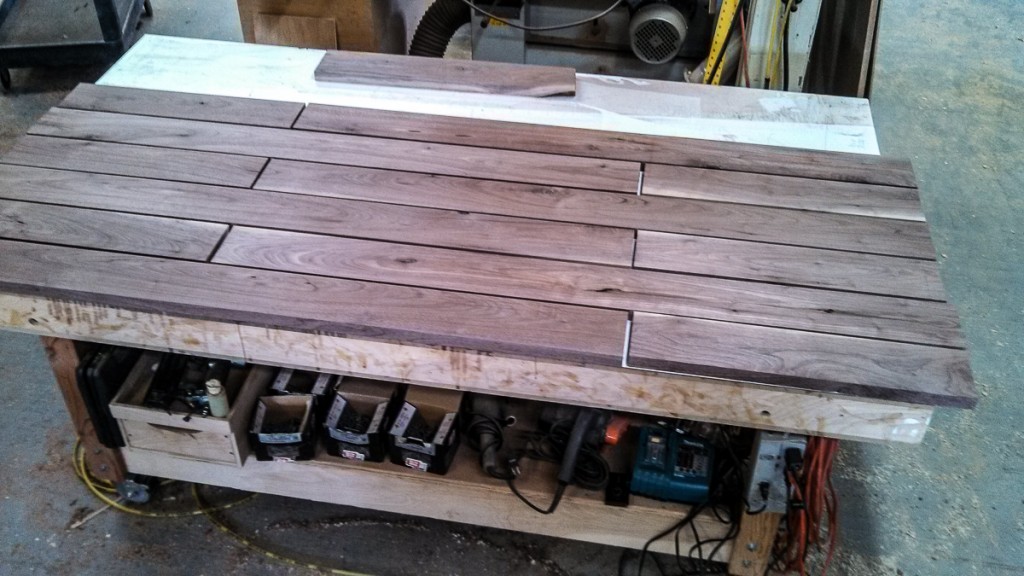 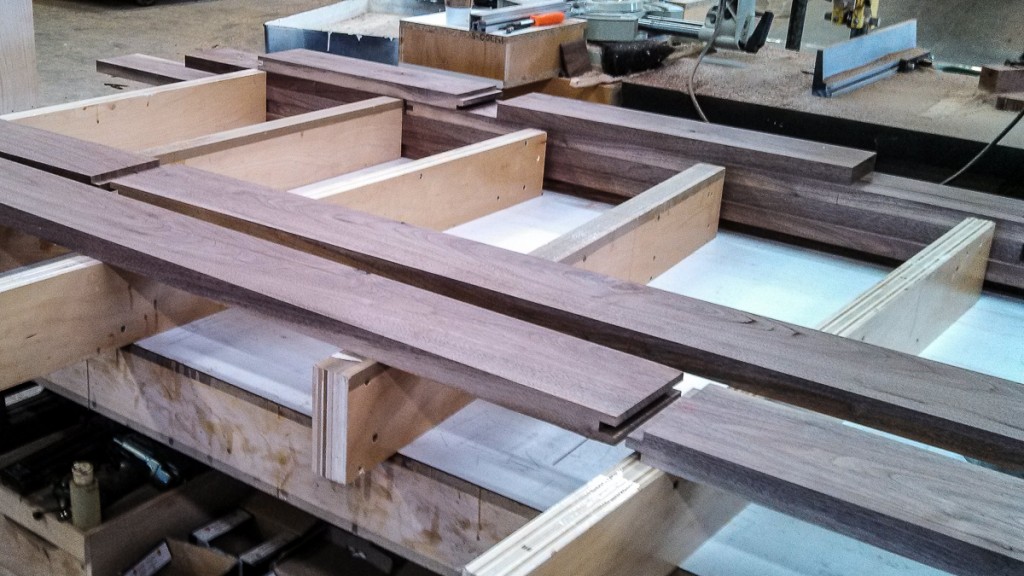 The second problem was quantity.  There seemed to be two different species of walnut represented in the stack, perhaps eastern black and claro; neither alone would be enough for the planned table, and they looked so different we didn’t want to combine them in one piece of furniture. 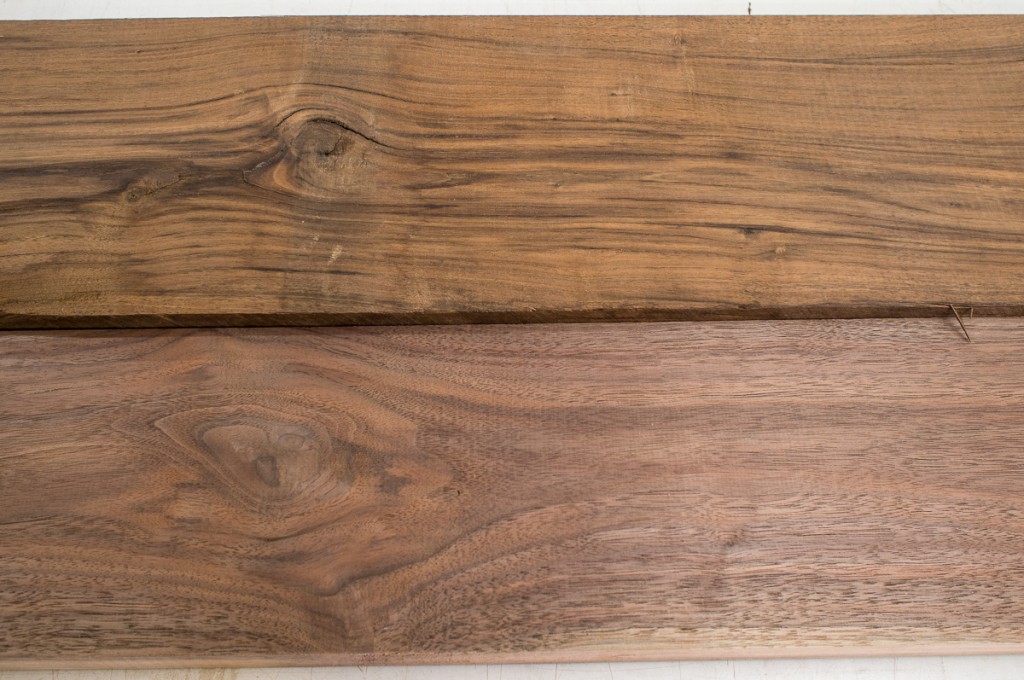 Since the 50-year-old walnut was so distinctive, we didn’t think we could find commercially-available or locally-cut material that would be a good match.  The client also was very concerned with maintaining the integrity of the wood as a way to honor his uncle.  So we set out to be tricky.

The aprons for the long sides of the table were the first challenge we tackled.  These needed to be nearly 7 feet long, but they also played a critical structural role to keep the long tabletop from sagging.  We didn’t feel that we could join them mid-span as we’d done with the boards making up the top.  Instead, we started with a long poplar core and glued walnut to the edges and ends.  To get the long walnut face for the width of the apron, we cut thick walnut veneers and book-matched them end to end. 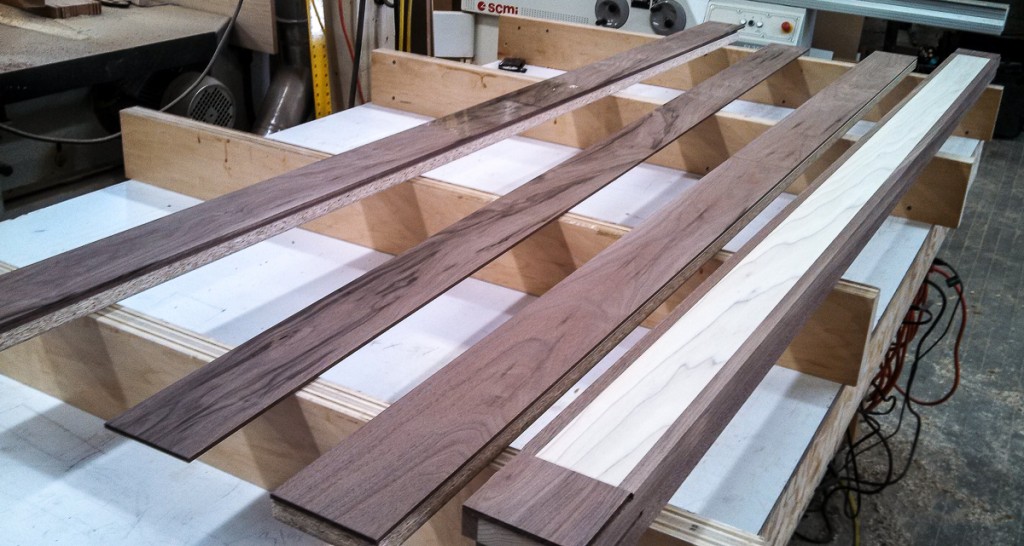 We had wanted to prioritize the tabletop and the aprons, as they would be most visually prominent, but we were getting seriously short of material by the time were making the legs.  We did what we seem best at — making something simple very, very complicated.  Each of the straight, square legs was glued up from 7 separate pieces of wood.  First, poplar blanks with walnut ends: 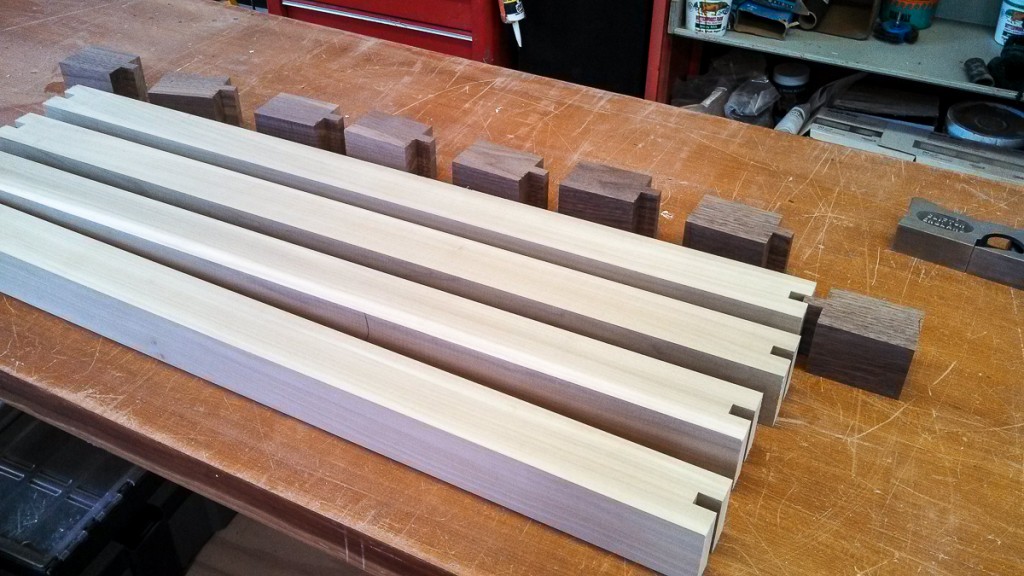 Then gluing a walnut veneer for one inside face: 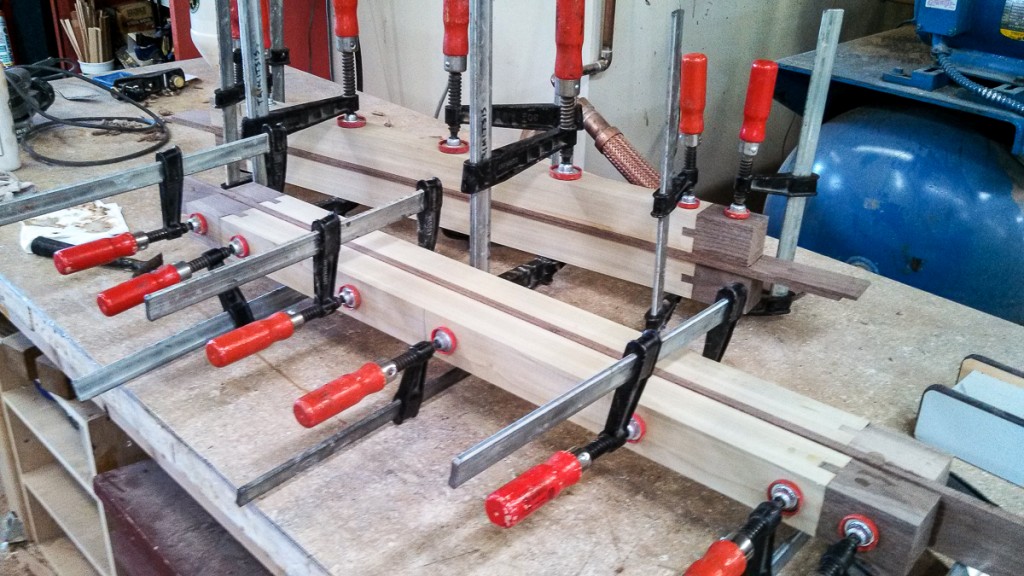 And a second veneer: 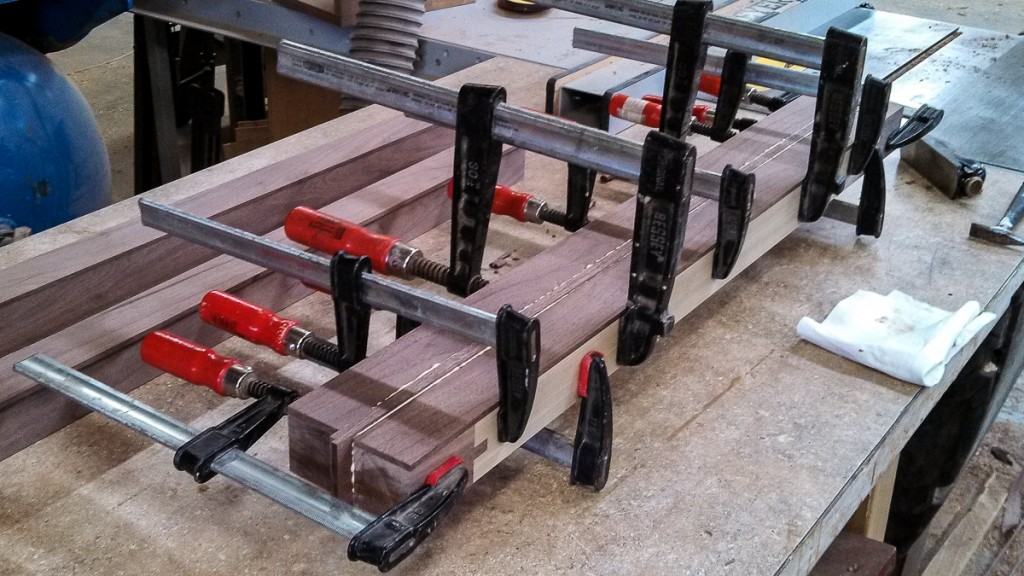 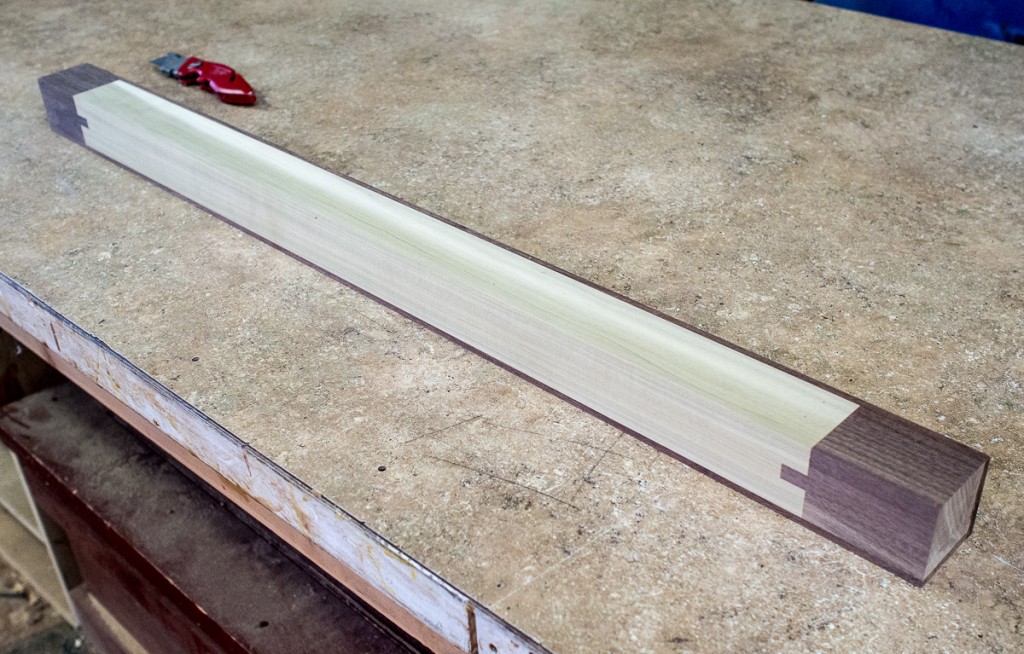 And finally a thicker mitered cap for the two outward-facing sides: 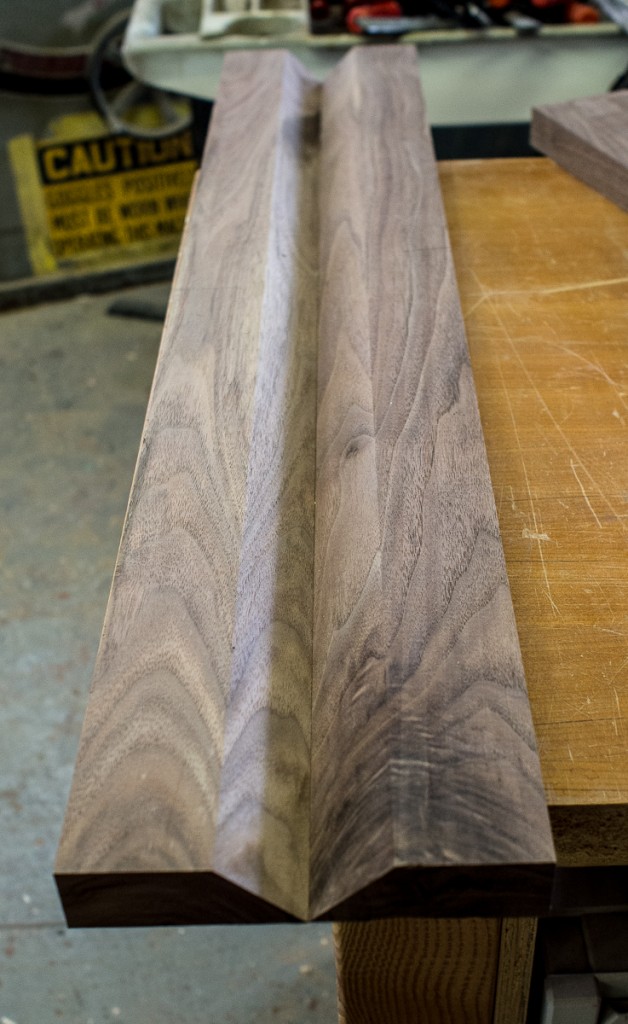 Hopefully, none of the effort is visible in the finished table: 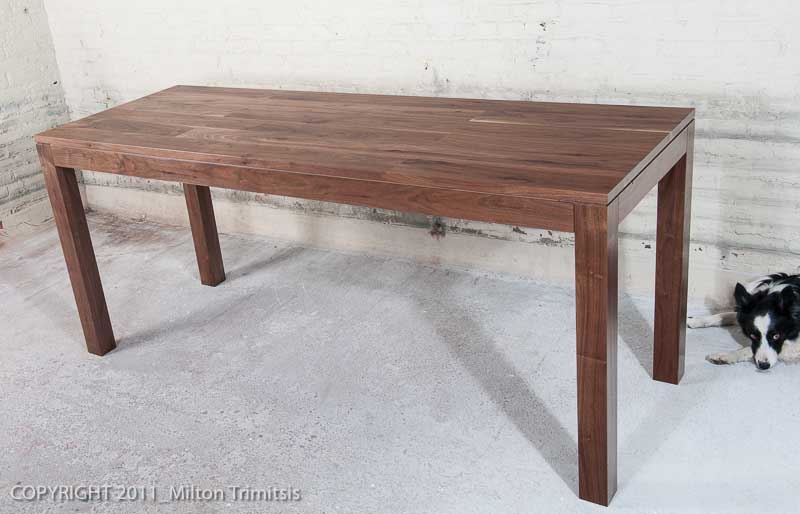 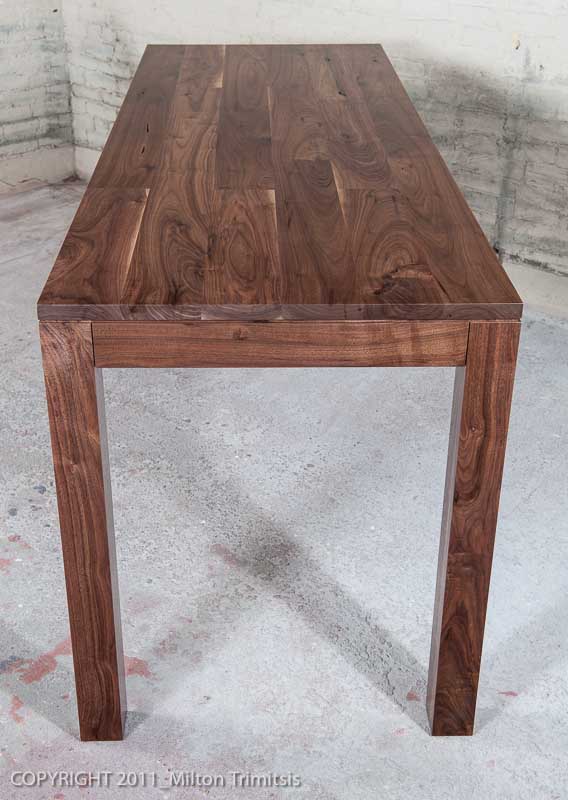 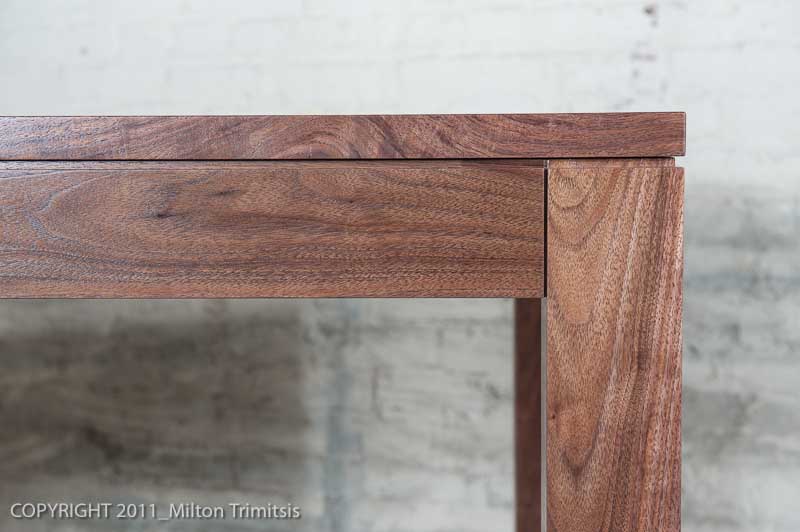