Posts from the “Found” Category

We rebuild a lot of porches, but our current project is more rewarding than most.  Though the house was built in 1880, and the front porch had adopted a pronounced rightward lean, the important bits were still there.  Benign neglect is often our ally, and in this case enough of the original architectural details were still present that we’ll be able to recreate this porch almost exactly.

The deck and floor framing had rotted to almost nothing, so we removed them, along with the masonry steps, to leave us with the parts we planned to restore. 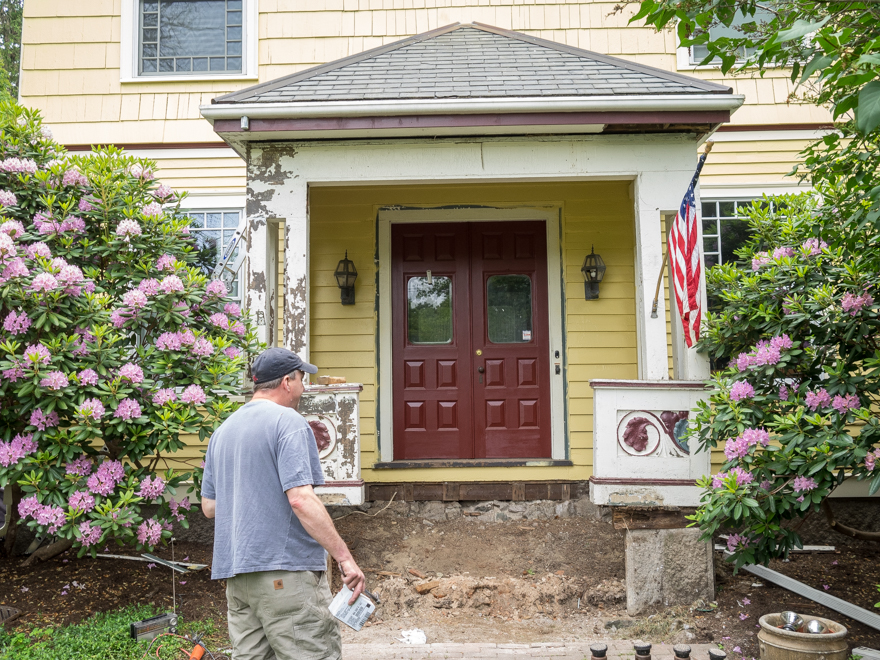 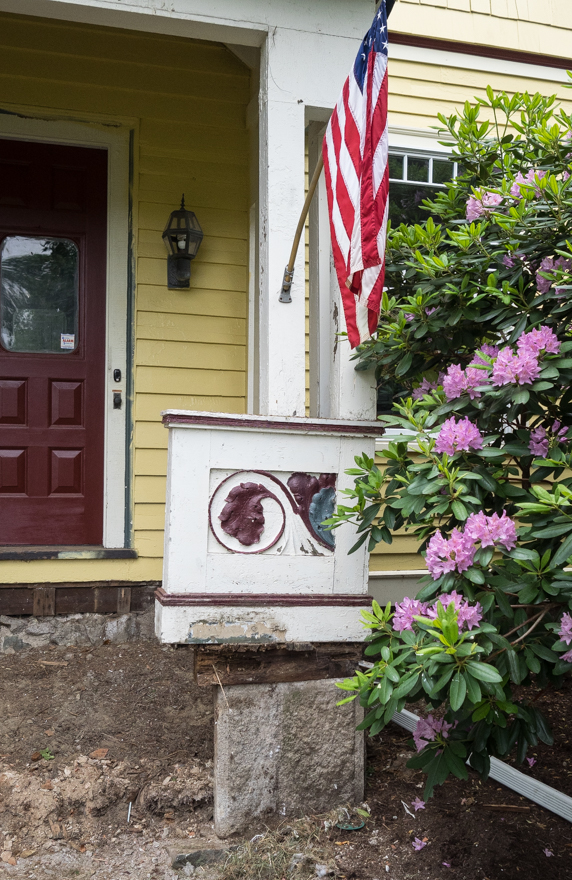 The carved panels, in particular, were pretty well preserved, even though the framing inside the half wall was almost non-existent.  We disassembled the panels and the columns above so we could re-support the roof, with the intention of repairing and reusing the decorative pieces. 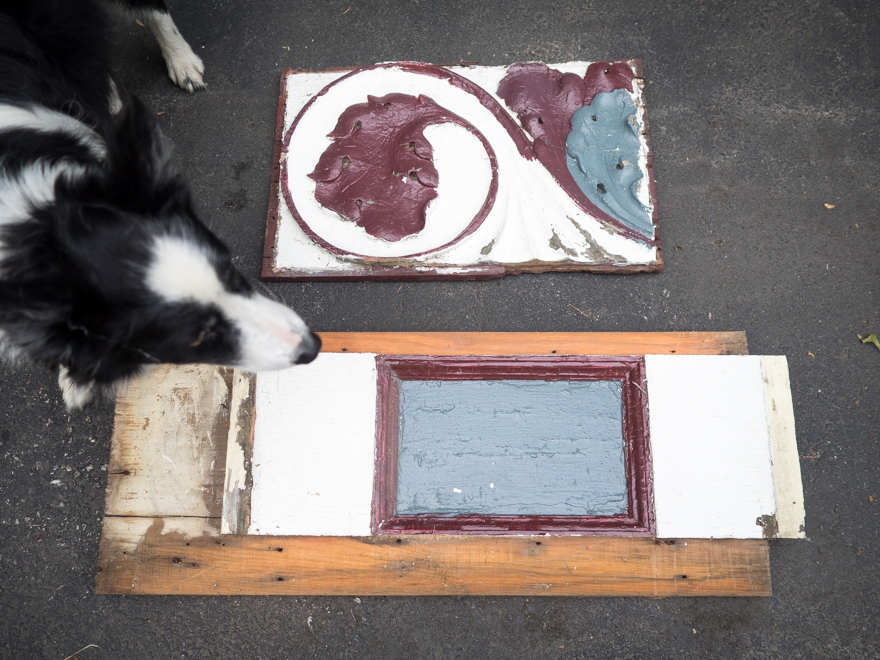 Carved panels with Luc for scale

The plain panel is from the back of the half-wall.  The bonus came when Dan checked the other side of the plain panel: 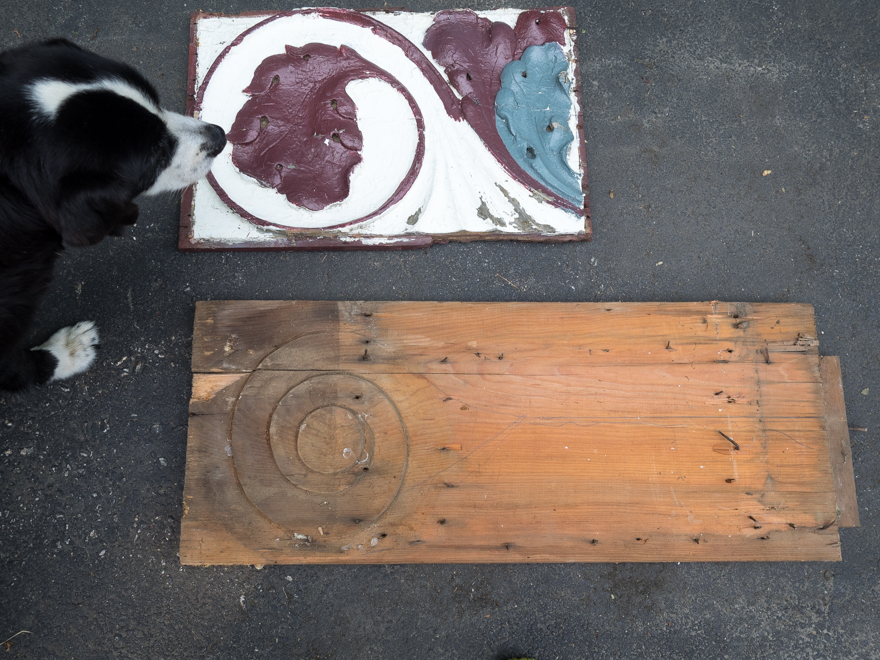 Visible and hidden carvings, with Musti

It seems that someone on the original work crew had done some practice carving.  Over lunch, we were imagining a scene where the young apprentice proudly shows the work to his boss.  The boss pats him on the head and assures him that his scroll will find its way into the finished porch… 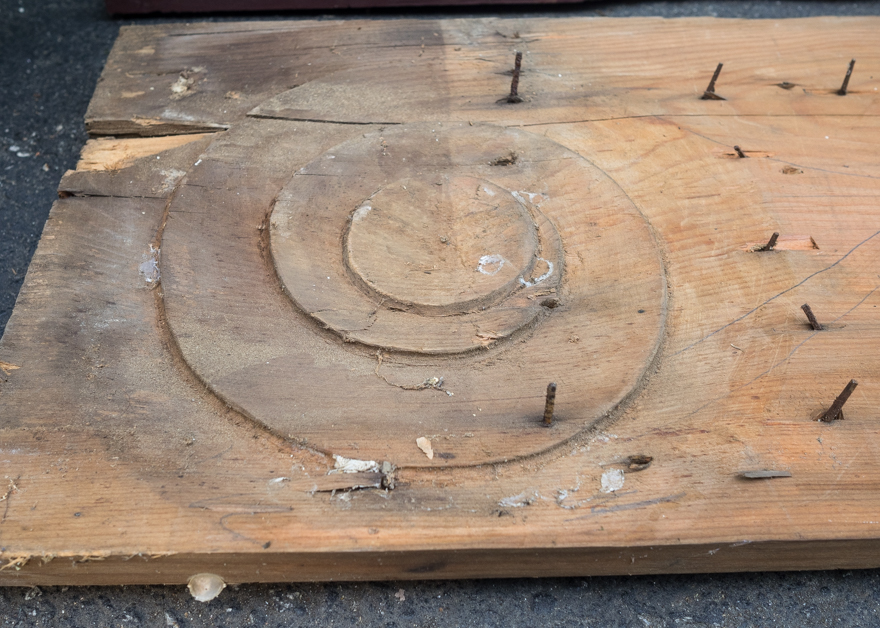 Just part of the job, Ma’am

No one warned me about cats.  There was nothing in the curriculum at North Bennett, and none of my early employers mentioned anything.  But it turns out that cats play a crucial role in our daily work:  keeping the indoor cats in, the outdoor cats out, making sure there’s litter box access for everyone who needs it.  And sometimes it gets more interesting.

Our current job is in a very feline-friendly neighborhood, so we didn’t pay much attention to the persistent meowing coming from the front of the house.  But around mid day, our client realized that her very shy cat Mika was not merely hiding but actually missing.  Then we looked up: 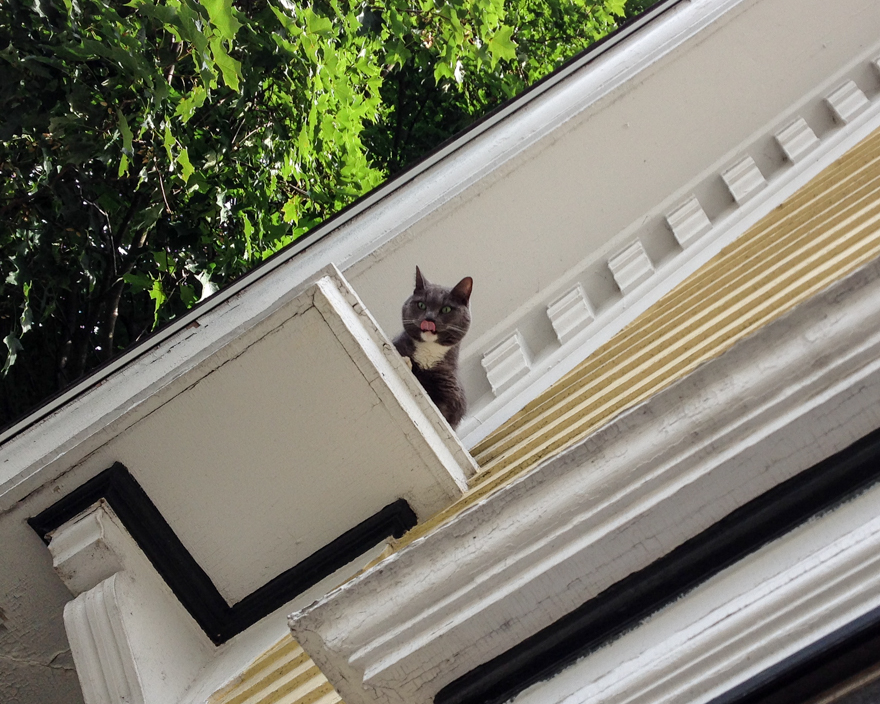 It seems that she made her way out of a (barred) window in the attic, across two window hoods, and onto the roof return.  Dan and Ralph saved the day. 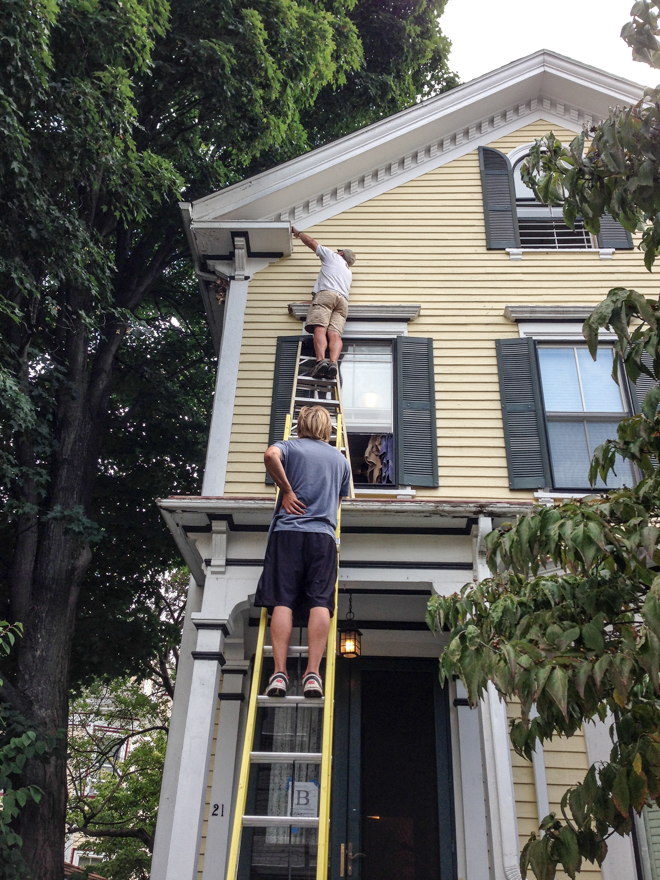 How to turn 6-foot boards into a 7-foot table

We had finished the carpentry for the kitchen, and the only thing missing was the table.  The clients and architect had long planned a large, counter-height table to complete the kitchen, but a suitable table was not presenting itself.  The unusual dimensions almost certainly precluded finding a pre-built table, and no custom design had gelled yet.  The call from Paris (Texas) broke the logjam.  It turned out that our client’s grandfather, a woodworker, was close to retirement, and he was clearing out his shop.  He had a pile of walnut that he’d had cut almost 50 years before and never gotten around to using.  Would his grandson be interested in it?  He was, and worked to convince me that I should be too.  Several…

One of the joys of buying an old fixer-upper is discovering all the wacky things that previous owners have done.  Humility of course tempers the pleasure, as a boy can’t help but wonder which of his design decisions will turn out to be the avocado fridge of 2013.  Sometimes, though, the universe is generous, delivering a detail so outrageous as to preclude introspection.

My colleague Evan recently bought a fantastic little Cape in Watertown, MA.  It’s a solid house in a great neighborhood, and just the right size to be manageable.  And it gave us all the gift of carpeted soffits. 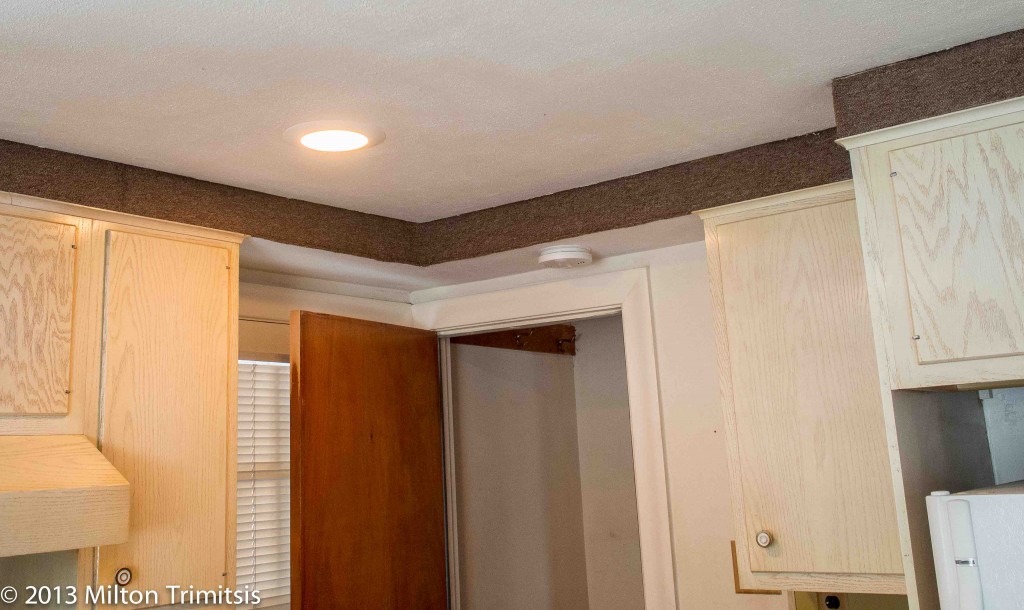 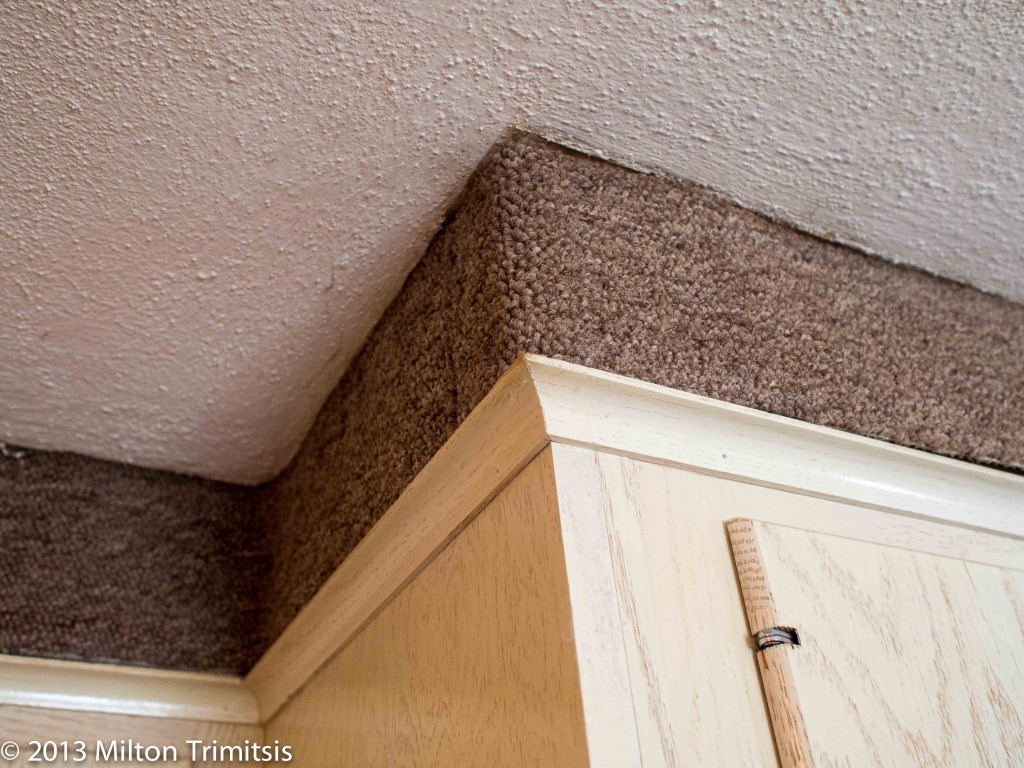 But maybe the best detail was evidence of a previous layer of carpet. 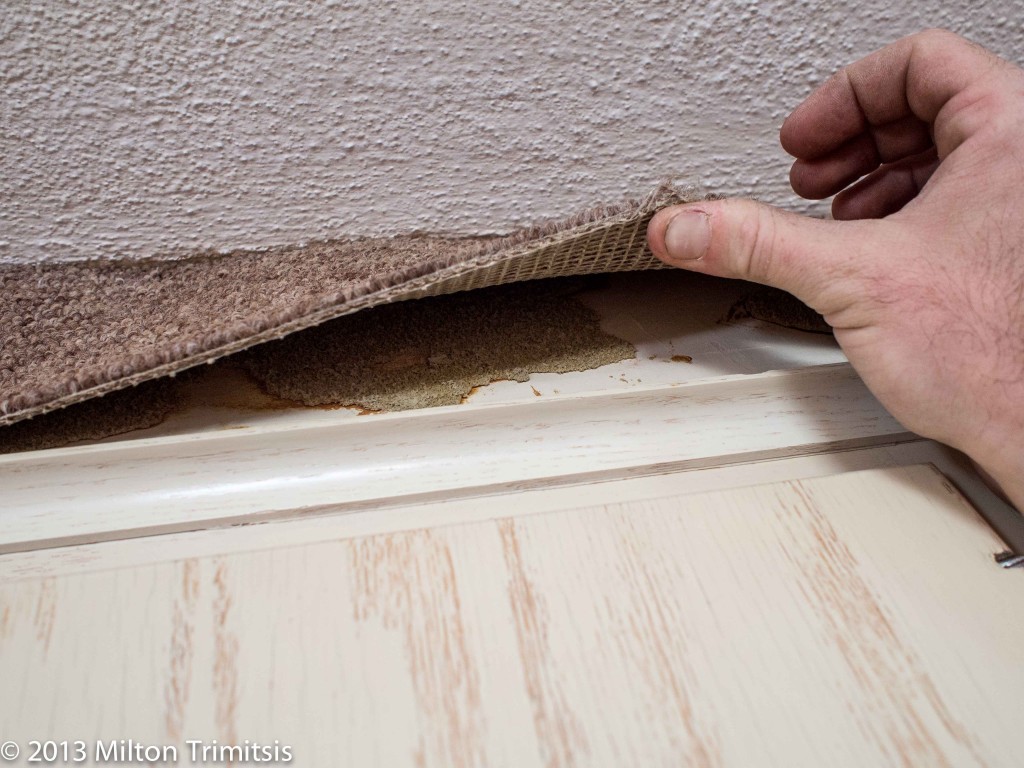 Paul’s house in the woods

I first heard of Paul Koval years ago from a graduate of the Cabinet and Furniture program at North Bennett Street School.  I was complaining about the paucity of really good cherry lumber at the big wholesale yards where we usually buy our hardwoods.  I think it was Sam Chase who said to me, “Well, there’s this guy, and he’s out in the middle of nowhere, but he has some amazing stuff — wide cherry and air-dried walnut, really gorgeous.”  I called the number on the little slip of paper that Sam gave me, and crossed my fingers.  Wood guys can be a grouchy bunch, wary of greenhorns wasting their time, and I was newly enough in business to still feel like an impostor.  …

We saw hints before we started the project that there had been a fire at some point, but we weren’t sure of the extent.  The fire predated the current owners, and they weren’t aware of any lingering issues.   When we opened up the walls, it became clear that the fire had been quite extensive.  There was charred framing, lath, and sheathing throughout one of the rooms, as well as evidence of a less-than-careful repair job.  Large areas of framing and sheathing were painted white, presumably with a shellac-based odor-blocking paint, and other sections had been crudely replaced. One inside corner, though, was particularly troubling.  It wasn’t just ugly, but seemed like it might be structurally insufficient.   The post was painted white, so…

Also found in the bathroom 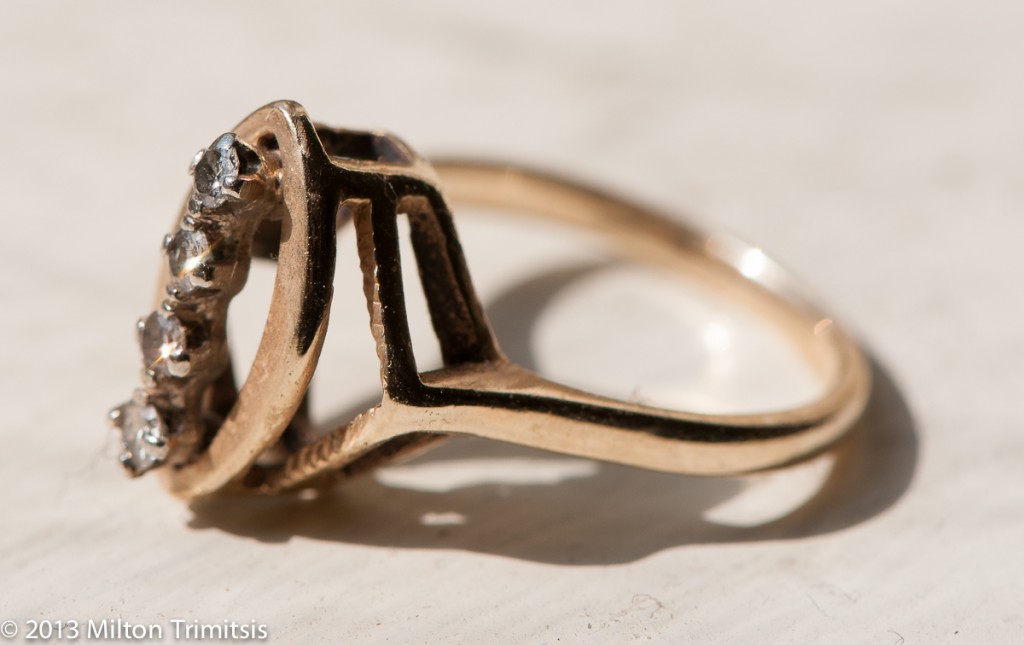 I guess there’s something about bathrooms in Jamaica Plain.  We found this ring tucked behind a vanity cabinet during a whole-house renovation a few years ago.  When it turned up, I anticipated a tearful reunion scene when we presented it to our clients, but the ring wasn’t theirs, and they didn’t seem especially impressed (I thought it was pretty cool).  Our current clients were more excited about the dentures.

Found in the bathroom

Someone tucked these dentures behind the beadboard behind the vanity cabinet in the upstairs bathroom.  Were they playing a prank, or was this some kind of time capsule?  I regret to report that my squeamishness prevented me from thoroughly examining the materials and detailing in the teeth.  Perhaps I’ll have more to report later… We found the envelope in the space under the bathtub, in the same bathroom as the dentures.  The addressee is Ethel Beaument (sic).  I got sucked into the website of the Jamaica Plain Historical Society recently and discovered that Ethel Beaumont seems to have been the granddaughter of a Col. Frederick Beaumont, an early owner of the house we’re working on.  The account suggests that some version of the…