We recently finished a renovation in Brookline, MA, in a generally worker-friendly building:  there was air conditioning and heat at the appropriate times, and, since we were working in a penthouse unit, an excellent view.  The building had only one dammit feature, which will become relevant later in the story.

The architect we worked with, Carol Marsh of Helios Design Group, did her job perfectly:  she designed a beautiful space, and left the details of execution to us.  Perhaps the most challenging detail of the kitchen was a ten-foot-long walnut counter, supported at one end by cabinets and at the other end by a single leg.

The fun started early, as it turned out that stock of sufficient length was not common.  Highland Hardwoods in Brentwood, NH, turned out to be the only place in Eastern New England with long 8/4 walnut.  They had exactly three boards, all of which went into the glue-up. 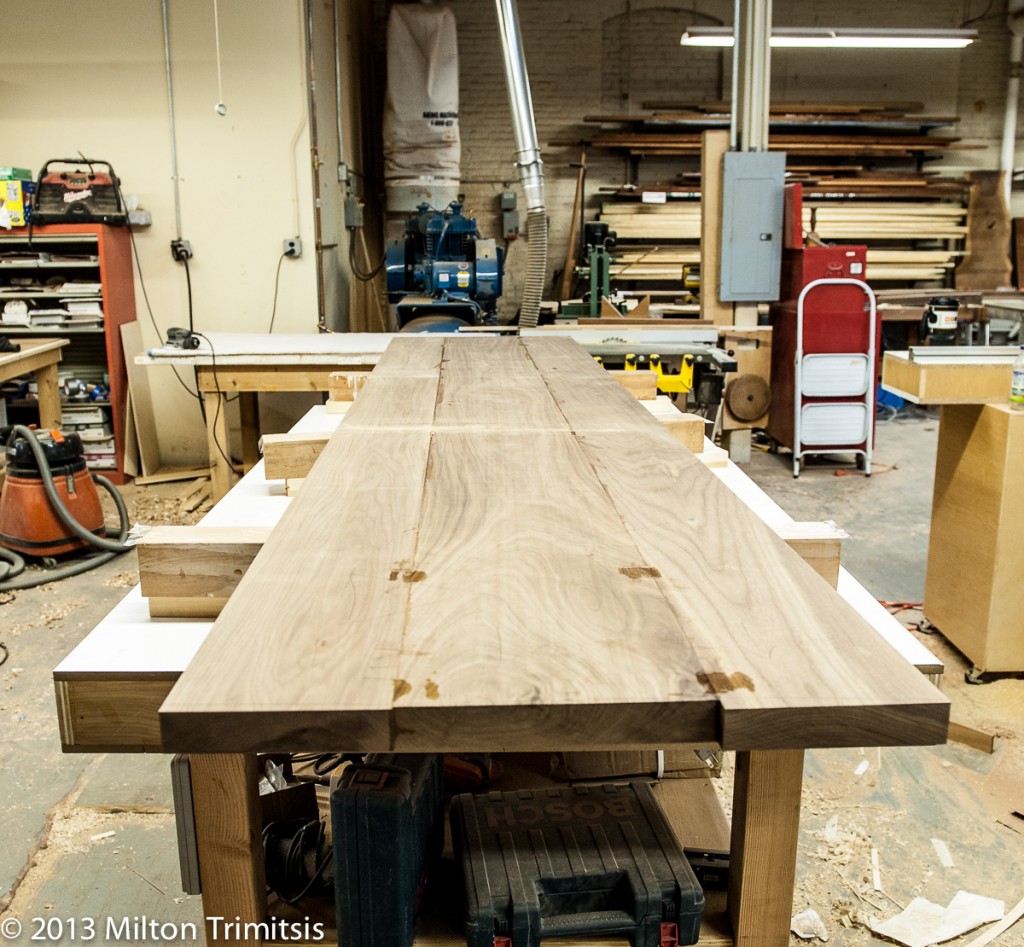 The glue-up went well, but we were surprised by how torsionally flexible this massive slab turned out to be.  This led to the second complication, as the architect and clients were strongly opposed (legitimately so) to any kind of visible apron or stretcher to reinforce the leg, out of concern that it would spoil the clean lines of the counter.

We needed a way to stiffen the outer edge of the table, and steel, the woodworkers’ best friend, came to the rescue.

We welded 1″ square tubing to a modified length of heavy 4″ C-channel, and mortised the back of the counter and the top of the leg to receive it. 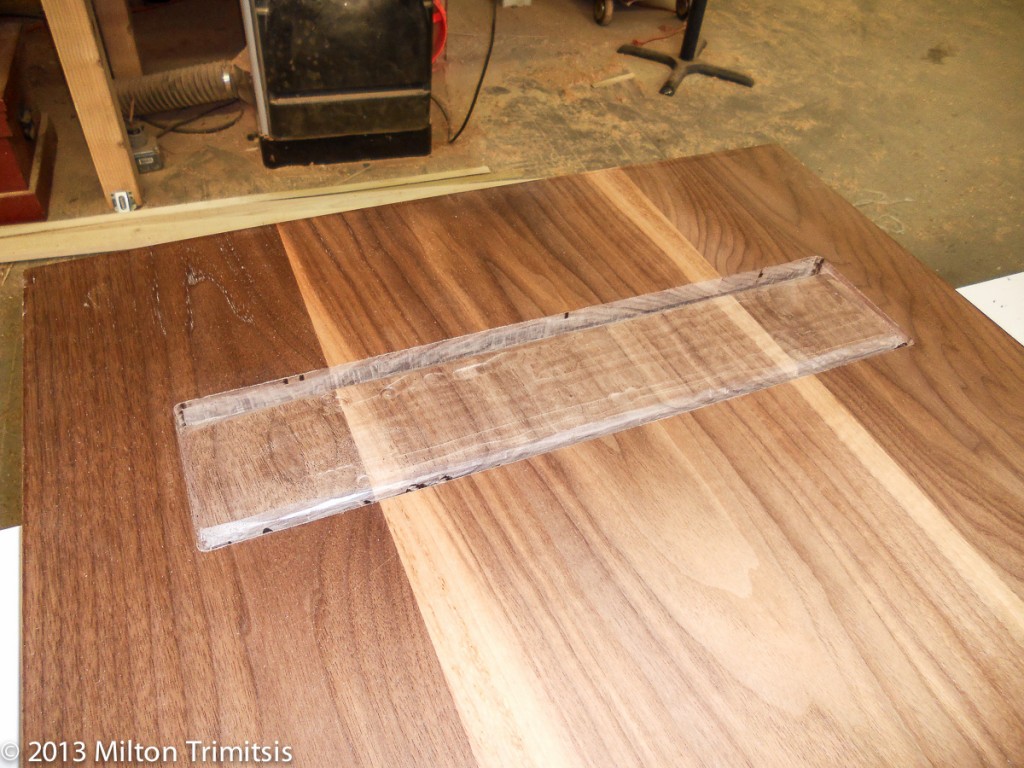 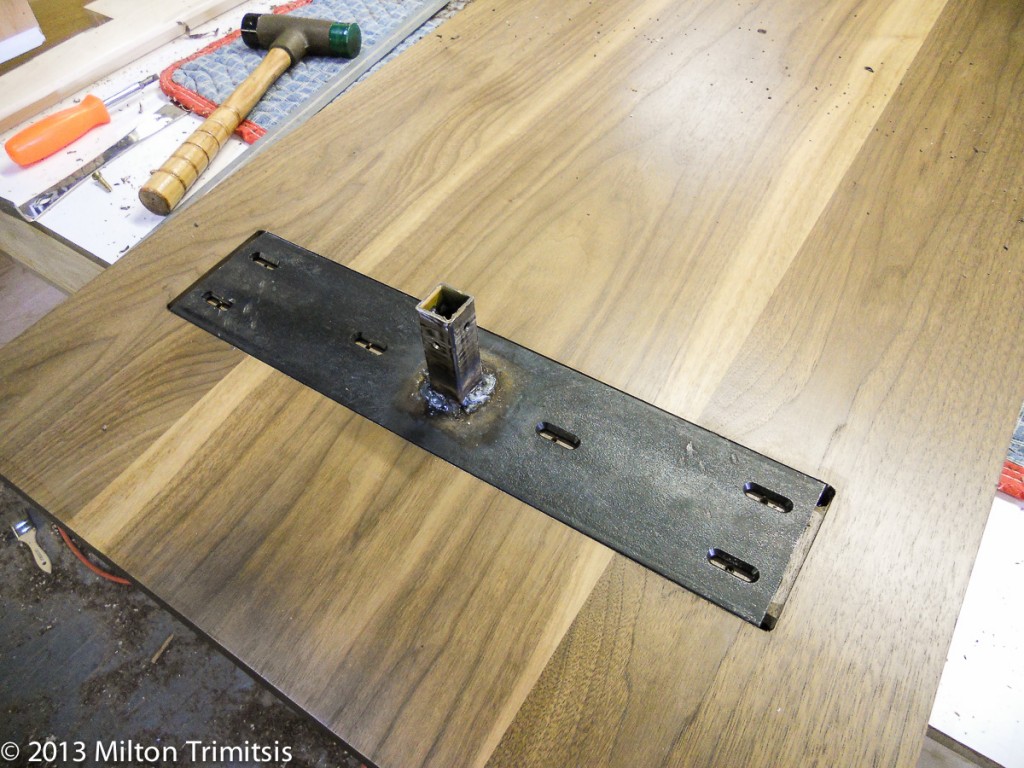 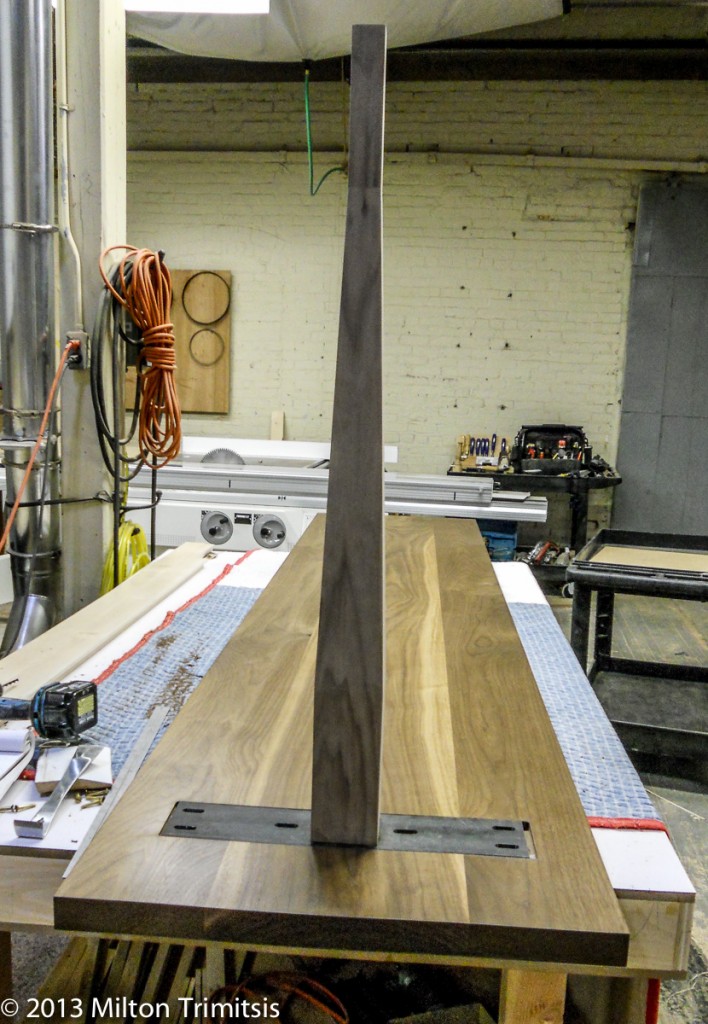 Everything had gone fairly smoothly up to this point, so we figured that our luck was up.  The one shortcoming of the building we were working in was its tiny elevator, coupled with its narrow stairwell.  And the fact that we were working on the 9th floor.

We had measured the stairwell ahead of time, and the conclusion was that the counter would either just fit, or just not.  Four of us stripped down to t-shirts and prayed to the god of spatial relations. 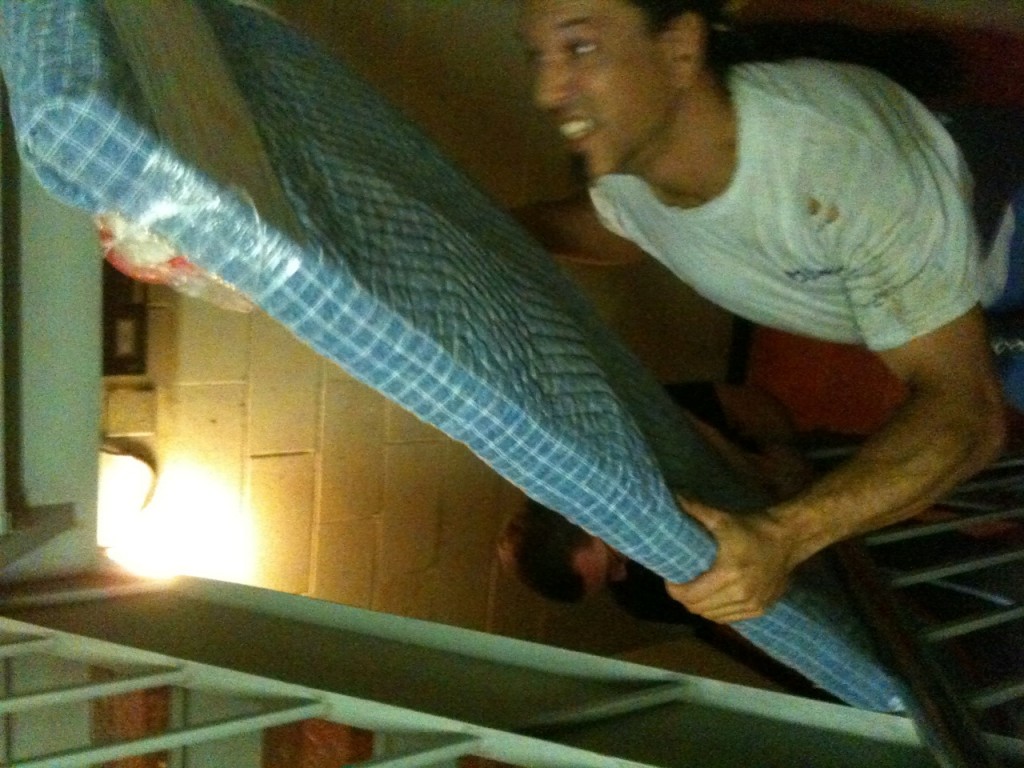 It fit.  But it turned out that the stairwell was not to be our downfall.  Once we got the counter into place, with sunshine streaming through the skylights, we realized that there was a blemish in the finish. 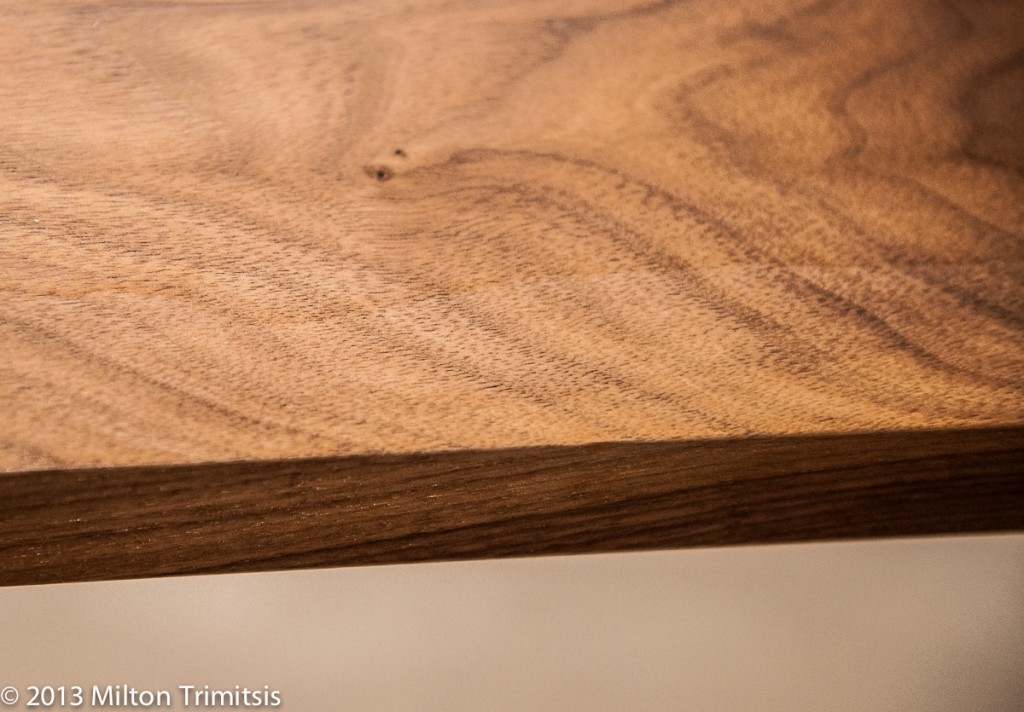 The problem was subtle, but once seen became painfully hard to ignore.  We had finished the top with wash coats of garnet shellac, followed by a water-borne top coat (EM 2000 from Target Coatings).  There was a very visible lap mark in the shellac layer that crossed perpendicular to the grain (though it was nearly invisible when the grain was parallel). 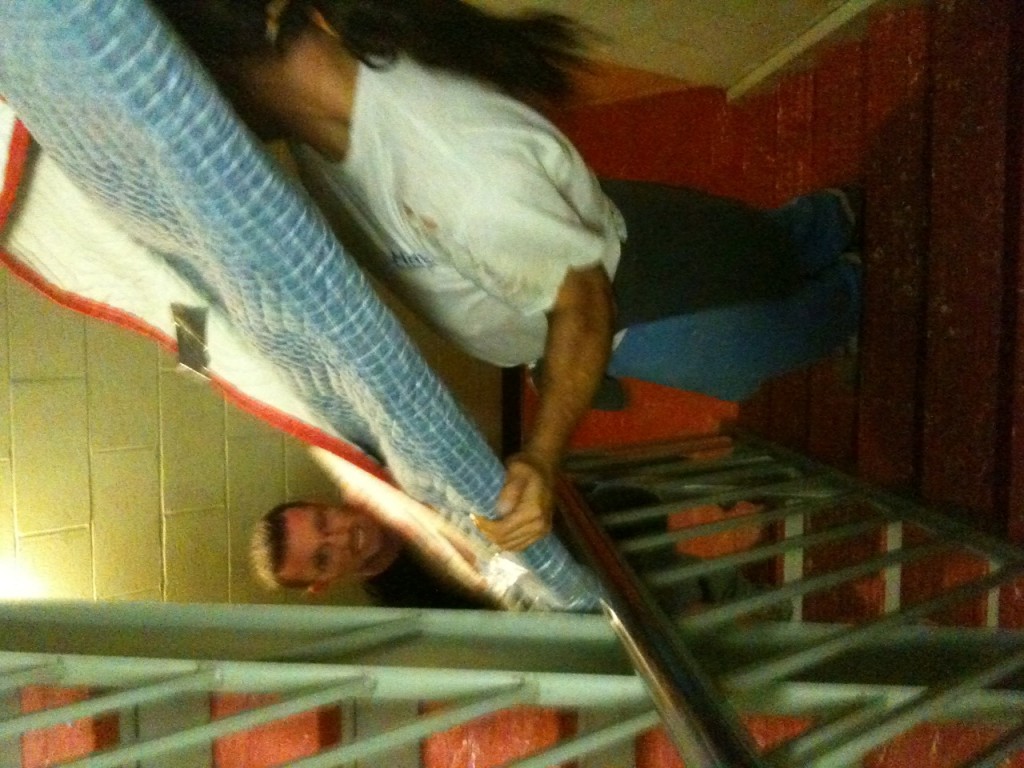 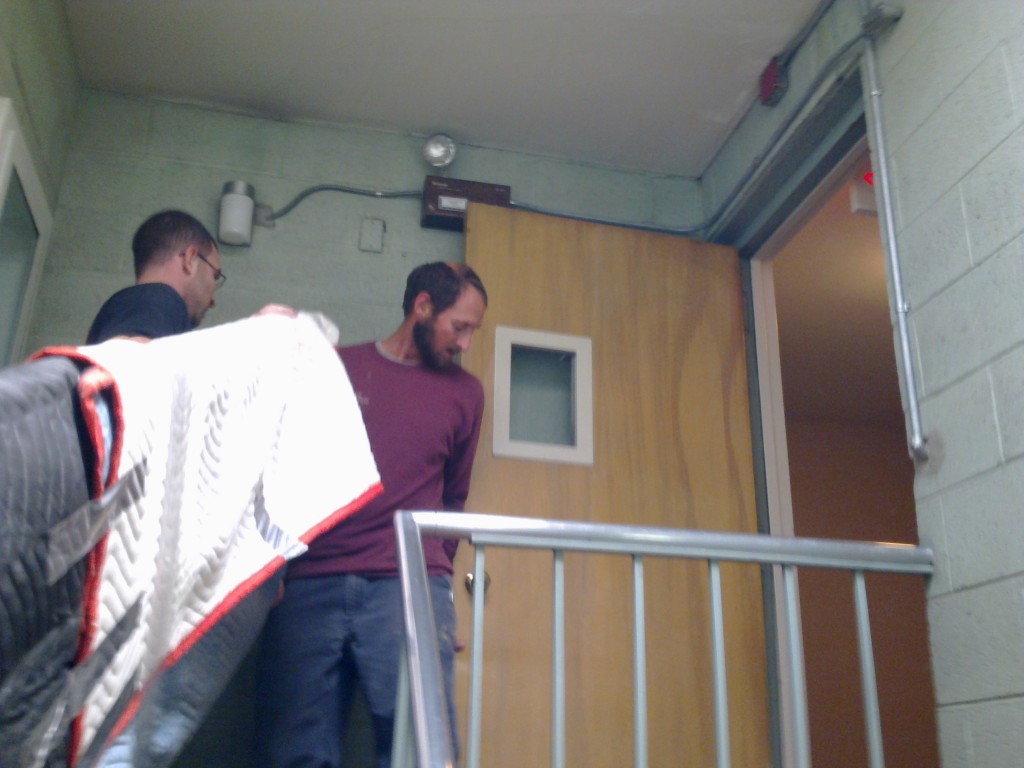 And finally, a completed installation: 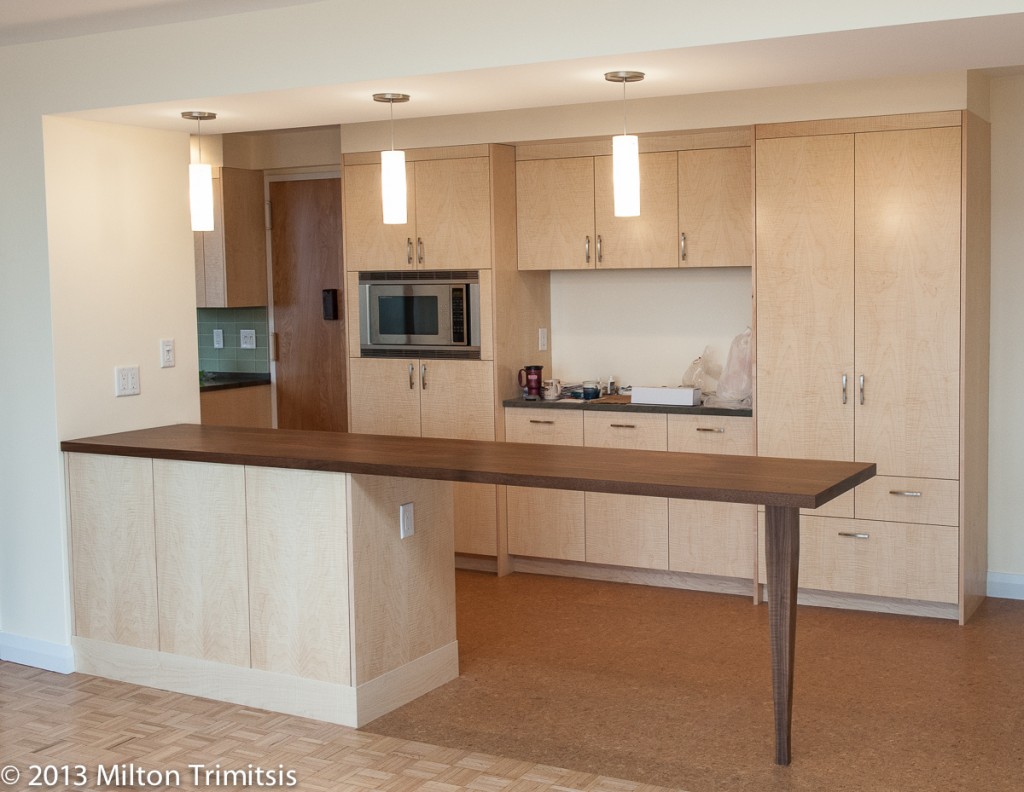